~So I thought I ought to address using the word, 'Gypsy' in the title of my business in case anyone has gotten offended or confused.

First off, I am not a gypsy, that I know of.  Although the gypsies that first left India (their place of origin) and went west stopped in Armenia for quite awhile, long enough for the actual Roma language to be influenced by and contain many Armenian words.  Gypsies were well accepted there unlike in other places and well integrated into Armenian society to the point that it wouldn't be easy to tell Armenian from Roma citizen, so who knows, it could be part of my Armenian heritage. Link:> Roma background, esp. in Armenia. and this link:  Tat's & Gypsies in Armenia Armenian gypsies are now called Lom or Bosha and speak a different language than Romani, which come from the gypsies now known as Roma people. Roma has become the term to name the various gypsy tribes primarily in Europe. Link to> Link:> Roma becomes self-appellation name of 'gypsies' for most but not all gypsies.
I am a mutt if you will.  Armenian (within that there may be a mix as my grandfather looked North African when he was young), Russian-Jewish, English, Scottish & Irish and who knows what else.
>>I just had my DNA done and it says all of the above PLUS 6% Scandinavian (wtf?), 10% Southern European (Italian, Greek or Spanish)-ok and 6% Middle Eastern from the Egypt, Jordan, Lebanon area which explains why my grandfather looks north African/Moorish a bit.  Very interesting and explains my features a bit more.  Except for the Scandinavian bit, but that could explain the 3 rogue blond hairs that have been growing in random places on my body for two decades.  ??? (cross eyes here). I only have one left though.  So strange!

I have moved over 28 times in different places in my life, gone to over 20 schools and shit, studied each half a dozen art and dance forms…had way too many jobs and lovers and yada yada….so for me, gypsy fits, even though the name of my business isn't necessarily always about me.  Read on and I'll explain.

I have been recently told by one person at a store who heard from someone else who was not a gypsy themselves that some Roma people do not like or use the word gypsy any longer because for many centuries it has been used derogatorily in the persecution of gypsies.  This I understand, as gypsies have been one of the most persecuted peoples in human history.  But the word gypsy as I am using it, is not being used in any negative fashion, much less talking about Roma people specifically.  From what I've read, not all gypsies are Roma or speak Romani.
There are gypsies all over the world not necessarily called Roma but living the gypsy lifestyle in true form and refer to themselves as Gypsies.  So some Roma et al, don't mind the word Gypsy and others do.  It just depends on the person.  This is an excellent article written by a gypsy that addresses the origins of different gypsy tribes as well as word usage.  Link to> Gypsies around the world, Rom and others.

The meaning and origin of the actual word 'Gypsy' is from two sources, it first came from Middle-English and refers to the people thought to have come from Egypt=Gypciens. It turned out not to be their place of origin but India instead.  The French word, 'Gypsy', was a shortened word that evolved from Gypcien.
Read this link to explain a bit more of it's origin, Link> Origin of word, 'Gypsy'  You can find more about the origins of this word online.

So the word 'gypsy' is not a bad word per se, but like calling Native American's, Indians, it was a misnomer based on miscalculations of origins by other people. Typical of Europeans at the time to misname a group of people.
Today many Indians still call themselves Indians even though we now know that Columbus didn't find India on that fateful trip but instead, landed on Turtle Island or as it came to be known, America, but thought it was India, thus he called those people, Indians.  Doh!
Yet Gypsy is an even more descriptive word that goes so far as to describe a lifestyle but because of the long-standing racism in Europe, the word gypsy was thrown around nastily whenever angry utterances were made about these people and still are today there.  It is a LOT less so in America where contrarily many Americans look positively towards Gypsies and their seemingly free-spirited, individuated lifestyle (minus those stupid reality tv shows that exploit and depict something that seems altogether non-gypsy but just crazy…but what do I know?).  Even if some of those notions are romantic and not always realistic, there is at least some appreciation and curiosity going on rather than persecution in America.
Therefore, gypsy to most people means, nomadic people/person living outside of a society's main culture and traditions. And for me, having been raised counter-culture already, not relating much to this culture and being a mix of cultures and influences myself with a restless spirit, that term fits in a positive way for me more than I could ever explain.

Naturally I want to respect people's wishes to be called what they want to be called but in this case, the word gypsy is a generic word to connote a free-roaming person who lives outside mainstream society traditions; a free spirit if you will in modern senses and not specifically the Roma people.
I, like a lot of people in this culture, have felt a connection or a draw towards gypsies for a long time as well as to native & tribal cultures- Not having felt much a part of or relating to American culture,  naturally other cultural lifestyles have resonated with me more.  Therefore I use the word honorably and respectfully and in no way mean anything derogatory about it. Hopefully no real gypsies are offended by this and I welcome any friendly contact for a conversation about gypsy history and culture from any gypsies.
Reach out, we can share tea and see…  :)

The name of my business is a way of honoring that free untamable spirit in women as well in myself.  Nearly everyone else who sees my company name loves and embraces it~!

Many many people, primarily women relate with my company's name and the picture that goes with it.  Women are infinitely drawn to it.  I think this says a lot.  It speaks to them in a way that conjures up something magical and old for their spirit.  Something liberating.  I like that.  I want to be that in the world:  a fire-starter of ideas and hope for people, especially women.
~~~
As for the picture…she's not even a gypsy but a woman in the woods.  A picture taken in the the earliest part of the 1900's during a time of romance and mysticism.  I just like her.  She speaks to me. She's non-specfic in terms of a cultural background or affiliation but just a free woman in the woods sitting in peace with her animals.  And yes, I have gotten the rights to use that picture from those who now own it.  :)
Hope this all helps.
Peace. 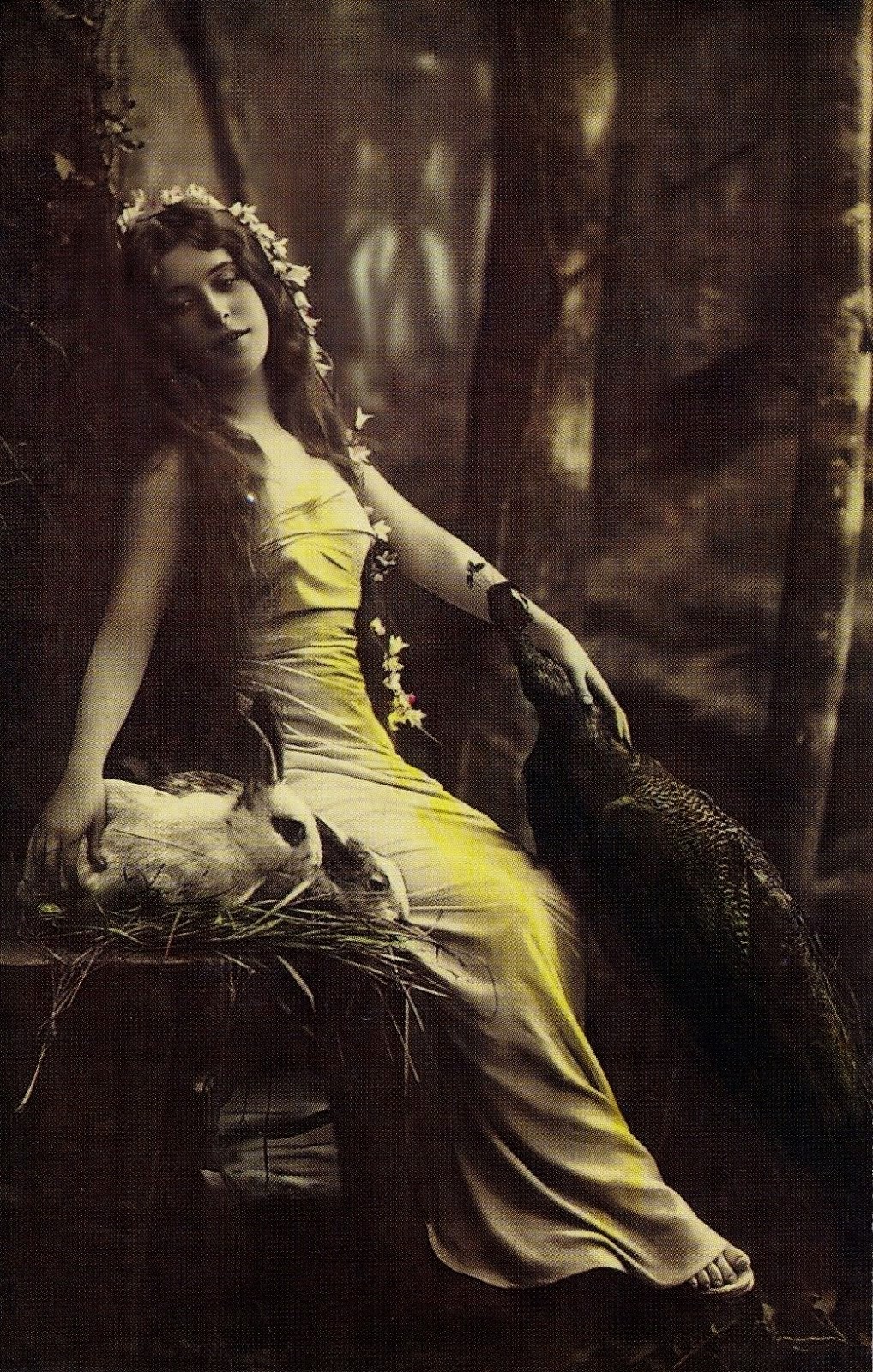 I have a new product I want to start making & selling online. I recently got off coffee this year. It was hard and I had those insane he...

Check Out My Other Blogs